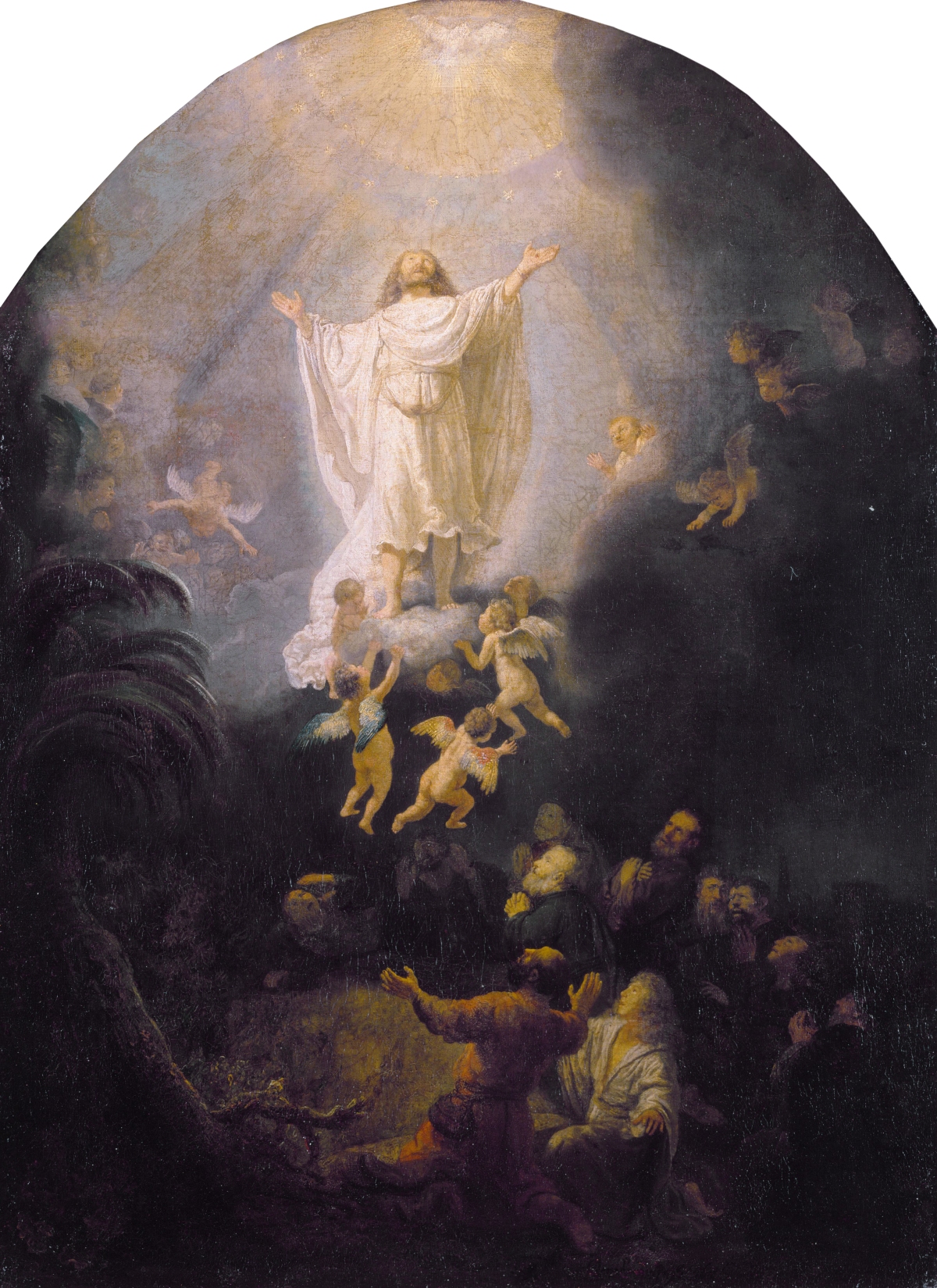 I had a bit of a family day yesterday, so I neglected to post, but yesterday was the Feast of the Ascension of Jesus, commemorating his ascension into heaven 40 days after his resurrection. We are now in the novena (nine days) of the Spirit, a time to pray for the Spirit to come and fall fresh on us.
Ascension is one of the more overlooked holidays on the Christian calendar, so I share this old post with you.

Today the church celebrates the ascension of our Lord Jesus Christ into his glory in heaven, to sit at the right hand of God the Father and rule as King over the entire universe.

Why is that Christmas and Easter are such big deals in our culture, but Ascension and Pentecost are largely ignored? Have you ever thought about that? I think that the reason for this is that Christmas and Easter do not confront people with the lordship of Christ the way that his ascension does. Christmas is the easiest to accept for our culture. It’s just a sweet little baby born on a manger. Nothing there to confront me. Nothing there to make me take stock in my life. Even if we come to terms with the fact that this baby in the manger is actually God incarnate, it is still easy to sentimentalize and ignore. Baby Jesus. Sweet little Jesus. Tame Jesus.

I hear this quite frequently, “As St. Augustine said, ‘The Church is a whore, but she’s my Mother.”

The problem is that St. Augustine never said that.

If you try to run down the source of the quote, the trail ends in a book written by Tony Campolo. In Letters to a Young Evangelical, chapter 6 he writes, “I would urge you to consider this carefully, and to think about the words of St. Augustine, ‘The church is a whore, but she’s my mother.’ That statement brilliantly conveys how I feel about the church.” He goes on to argue that despite all the failures and sins of the church, she is still our mother, and thus we should be a part of her. Where Campolo got that quote is a mystery because he gives no citation. But if you look further back you will not find it, because it does not exist.

How do I know? Well first off, as someone who has read an awful lot of Augustine and an awful lot about Augustine, I have never come across that quote, and that quote just doesn’t seem like something he would say. A few years back after I heard it yet again I decided to try and find the source. That’s when I discovered that the trail went dead at Campolo. Luckily, as an academic I have access to better search engines than Google.

I went to two of the best search databases for Christian Latin texts, the Patrologia Latina and the Brepols Library of Latin Texts. Between the two of them they contain pretty much everything written by ancient Christian writers in the Latin language. I searched for church (ecclesia) and mother (mater) using several different synonyms for whore (meretrix and prostituta being the main ones) and nothing came up exactly like the quote. That leaves me 99% sure that Augustine never said that.

The closest I was able to find is from Sermon 213 on the Creed. What he says there is significant so I’ve translated it for you:

Let us honor the Catholic Church, our true Mother, the true Bride of her Husband, because she is the wife of so great a Lord. And what shall I say? How great is that Husband and of singular rank, that he discovered a prostitute and made her a virgin. Because she should not deny that she was a prostitute, lest she forget the mercy of her liberator. How can it be said that she was not a prostitute when she fornicated with demons and idols? Fornication was in the heart of everyone; a few have fornicated in the flesh, but everyone has fornicated in his heart. And He came and made her a virgin; he made the church a virgin.*

Here we find the concepts mother, church, and whore, but we do not find that direct quote we are seeking. In fact there is a significant difference between the quote Campolo gave us and what Augustine actually said. Augustine here is saying that the Church was a whore because she formerly lusted after demons and idols. She is no longer a whore because her great husband, Jesus Christ, has liberated her from her thraldom, forgiven her sins, and made her his virgin bride.

Campolo is trying to make the point that although the church fails she is still the church. That is right and good. However, that is not Augustine’s point. Augustine is preaching about the glorious redemption that the great Husband of the church has accomplished. She is praised because of what He has done in and for her. She is our Mother because He is her Husband and because He has sanctified her. To make Campolo’s point resonate with what Augustine actually said, we should love and cherish the church, in spite of her failures, because she is Christ’s bride. Because she is his only bride. He found her, liberated her, sanctified her, and married her. That’s why we love her even when she is imperfect, because she is the only bride Christ has. He makes her great.

It is then grossly wrong to say that the Church is a whore. In fact that is blasphemous to say. Augustine himself says so in Sermon 10, which I found when searching for this supposed quotation:

UPDATE: Cyprian wrote concerning this concept in his treatise On the Unity of the Church. Since Augustine cites Cyprian extensively, even from this treatise, it is likely that he learned this concept from the African great himself.

The spouse of Christ cannot be adulterous; she is uncorrupted and pure. She knows one home; she guards with chaste modesty the sanctity of one couch. She keeps us for God. She appoints the sons whom she has born for the kingdom. Whoever is separated from the Church and is joined to an adulteress, is separated from the promises of the Church; nor can he who forsakes the Church of Christ attain to the rewards of Christ. He is a stranger; he is profane; he is an enemy. He can no longer have God for his Father, who has not the Church for his mother. If any one could escape who was outside the ark of Noah, then he also may escape who shall be outside of the Church.