At Christ Our King, the church where I pastor, we’ve been recording our worship services, including the music. Here’s a recent rendition we did of the old hymn, “The Old Rugged Cross.” I hope it is a blessing to you!

The church throughout her history has kept regular, set times of prayer each day. Should modern Christians reacquire this ancient practice? 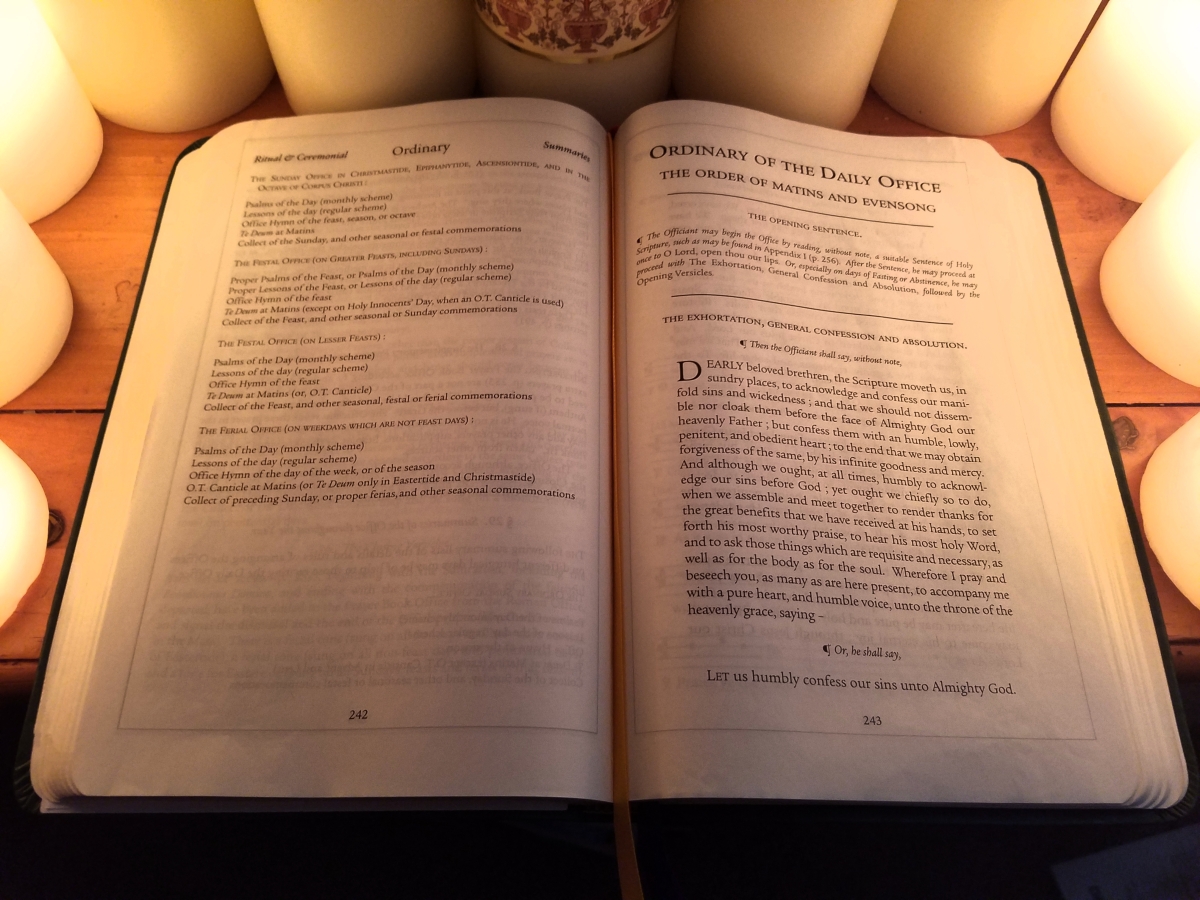 Note: this begins a series on my blog called Reflections on Reformation which will be running this year in commemoration of the 500th anniversary of the onset of the Protestant Reformation.

Early on in the history of the church, Christians understood that the 1st century Jewish practice of meeting for prayer at set times of the day was a good and biblical practice to continue. We find references to this in several places in Scripture. In Acts 3 we find Peter and John attending a set prayer at the temple at 3PM. Acts 10 seems to reference Peter continuing this practice in his devotional life as he was praying at the ninth hour (3pm). Later in the story he prays at the sixth hour (noon).  Pentecost occurred at the third hour of the day (9 am). In Jesus’s parable in Luke 18 we find two men going up to the temple to pray. While he does not tell us the exact hour, it was a corporate prayer service they were attending. Simeon and Anna prayed in the Temple continually, it says in Luke 2. We tend to assume this is individual devotional prayer, but it would make more sense if this referred to them participating in the set prayers of the temple service. In Acts 22 we find Paul praying at the temple. In Luke 1:10 we find a multitude praying in the temple courts at the “hour of incense.” In Daniel 9 we find Daniel praying at the time of the evening sacrifice. He did this even though the temple was destroyed and there was currently no sacrificial ministry occurring.

In the Psalms there are multiple references to prayer and times of day. Psalm 88:13 says, “But I, O LORD, cry to you; in the morning my prayer comes before you.” Psalm 141:2 says, “Let my prayer be counted as incense before you, and the lifting up of my hands as the evening sacrifice!” Psalm 5:3 says, “O LORD, in the morning you hear my voice; in the morning I prepare a sacrifice for you and watch.” Psalm 59:16, “But I will sing of your strength; I will sing aloud of your steadfast love in the morning. For you have been to me a fortress and a refuge in the day of my distress.” Psalm 119:147, “I rise before dawn and cry for help; I hope in your words.” Psalm 55:17, “Evening and morning and at noon I utter my complaint and moan, and he hears my voice.” Psalm 119:148, “My eyes are awake before the watches of the night, that I may meditate on your promise.” Psalm 134:1-2, “Come, bless the LORD, all you servants of the LORD, who stand by night in the house of the LORD! Lift up your hands to the holy place and bless the LORD!” Psalm 119:62, “At midnight I rise to praise you, because of your righteous rules.” This is not to mention numerous places in the Psalms where specific times of day are referred to with relation to receiving mercy, hearing God’s word, groaning, crying out, meditating on his greatness, etc.

Perhaps this is also what is meant by the several references in the scriptures to praying night and day and praying without ceasing. This would make sense in the context of gathered set times of prayer, which we know were happening at least in the temple and also in an extension of those temple services in private prayers (see Peter and Daniel above).

Are we to take these numerous references to prayer at specific times of day as a descriptive coincidence? Or do the Scriptures intend to prescribe a practice for God’s people? Indeed, the early Christians saw these references as scriptural warrant to offer prayers at set times each day. Based on specific times mentioned in scripture (just before dawn, third hour, sixth hour, ninth hour, sunset, evening, midnight) and based on Psalm 119:164 which says, “Seven times a day I praise you for your righteous rules,” the early Christians established set times of prayer at these times.

Not everyone prayed seven times a day in the early church, although for some this was the ideal (see Hippolytus of Rome’s Apostolic Constitutions). Yet the churches called those to prayer who were pastors and workers, those with vocations within the church and those who were able and willing to do so. Eventually communities sprang up who were devoted to prayer, such were the early monasteries. In the Rule of Benedict he lays out the liturgies for the set times of prayer along with the Psalms that were to be sung at them. In the ancient practice of the Benedictine Rule, the monastery was directed to sing through the entire Psalter every week.

This may be what Paul had in mind as well when he describes that the widows who are enrolled in the church when he writes in 1 Timothy 5:5, “She who is truly a widow, left all alone, has set her hope on God and continues in supplications and prayers night and day.” Interestingly, Calvin remarked on this in his Institutes in book 4:8:18-19 where he discusses the enrollment of widows as deaconesses to “discharge the public ministry of the church toward the poor and to strive with all zeal, continancy, and diligence in the task of love.” It is interesting because he does not address the apostolic command that these widows continue in supplications night and day. His reaction against late medieval monasticism was too strong to allow him to consider that possibility. In this he was not unlike many of the Protestant Reformers who saw the services of the hours as attempts to “appease God with songs or unintelligible mumbling.”

Despite Calvin’s protestation, the church has continued these daily prayers, the hours or divine offices throughout her history. At the time of the Protestant Reformation one of the main questions that arose was whether and which practices of the ancient and medieval church should be continued. While some protestant traditions continued the daily office in some form (mainly Anglicans and some Lutherans), most of the Protestants jettisoned the daily office in favor of the teaching ministry of the church. Calvin himself taught the scriptures daily, and for that reason we have an expansive collection of his biblical teaching. We might ask though, while teaching the scriptures is obviously a very good thing, should the corporate prayer ministry of the church have been abandoned? If the answer is no, what are ways that we can reincorporate this ministry into the life our churches today?

Evangelical churches have tended to relegate prayer to the private life of the individual believer. The emphasis on alone time with the Lord is in keeping with Christ’s teaching on prayer, and this was the main influence for Evangelical piety. Yet in the 20th century, Pentecostal and Charismatic movements have reacquired this ancient emphasis on prayer, while not taking up the ancient forms. Many charismatic prayer ministries seek to be faithful to God’s word by opening up prayer rooms where there is a sign-up and a schedule to ensure that prayers are being offered around the clock.

There has been much work recently in this area. James K. A. Smith’s work on Christian formation has drawn deeply from prayer’s formative aspect and the goodness of this for Christian formation. Additionally Greg Thompson in his public teaching ministry has made this a focus. Both Thompson and Smith have drawn from the life of the ancient church in its rich liturgies and from the Rule of Benedict which prescribes prayer as a way of life for disciples of Christ. It should be noted that both Smith and Thompson are active in the Reformed context, Thompson being a pastor in the PCA and having given a series of foundational lectures at Covenant Theological Seminary on this topic.

What then are we to make of this? I’m not suggesting that every Christian should pray the seven offices every day. Yet it would be helpful if Evangelicals leaned into this rich tradition to form our congregations in some way. It is also very helpful, if not necessary, that those who are in vocational ministry participate in the daily office as a way to rest, recharge, and fulfill our callings to intercede as ministers of word and prayer.

Won’t this require too much work and take up too much time? The great thing about the office is that once you learn how it works, you don’t need to spend time preparing and practicing like we have done for many chapel services and Sunday services these days. Find someone who can lead it well. Find someone who can chant psalms. Then just show up and do it. Take 15-20 minutes out of your day (minimum) to spend time in community before the Lord. I promise that you will begin to see tangible results in the lives of those who participate.

Martin Luther is supposed to have said, “I have so much to do that if I didn’t spend at least three hours a day in prayer I would never get it all done.” There is no written evidence that he ever said that, though perhaps it was a oral tradition that was passed down through the ages due to its poignancy. Whether he said it or not, we must remember that Luther was a medieval monk who prayed the hours. That shaped him and formed him in his knowledge of the scriptures and in his love and knowledge of God. Augustine prayed the hours. Chrysostom prayed the hours. Anselm prayed the hours. In fact, all the theological giants of the ancient and medieval church prayed them in some form. Our fathers and mothers were steeped in scripture because of this. We often think that we know the bible well and understand it even better. But are we steeped in scripture to the level that our fathers and mothers were? Who recited the psalter by heart once a week? Who read through the bible at least every three years? Who daily spent hours in prayer before the face of God?

Want me to help you learn how to chant the psalms? Contact me.

Apps for the daily office
These apps are available in your app store. Note: these apps come from various theological traditions.

Vita Pastoralis is a website that contains the thoughts, work, research, and observations of Tim LeCroy, Senior Pastor of Grace and Peace Fellowship and Visiting Instructor of Historical Theology at Covenant Theological Seminary.